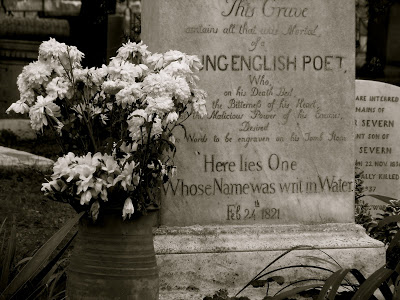 Besides composing many beautiful and interesting poems, John Keats had 25 years of life with many stories. Below are some interesting facts about Keats.

- Keats was a slender and short man being just over 5 feet in height. His hair was a reddish brown colour and curly.

-After Keats' mother left the family after her divorce, he suffered from chronic anxiety.

- According to a friend, Richard Woodhouse, Keats was particularly horrible at reading his own poems not giving them justice.

- When Keats became a published poet, he considered his earlier works to be awful so much so that he collected every piece of paper                     containing them and burned them.

- Keats was engaged to the love of his life, Fanny Brawne however they were never married. This was because Keats wanted to strongly build    his role as a poet and earn money before him and Fanny were married.          However, Keats became extremely unwell from tuberculosis and the                marriage never occurred.

- Whilst suffering from tuberculosis, Keats and Brawne could not have any       physical contact. They communicated through a glass screen and     sent       each other love letters. Some of the love letters that were written can be       viewed here.

The sources for this page can be found using the following links:
Header Image
Information
Final Image
Powered by